Thousands of businesses in the South of England lost internet services today due to a circuit failure but one county council called in a secret weapon – the fire brigade.
A Virgin Media circuit failure caused thousands of firms problems today but Gloucestershire county council overcame the problem when the county fire and rescue service Incident Command Unit to the rescue.
After a phone call from the council the fire brigade sent a vehicle along which parked in the Shire Hall car park and raised its satellite dishes to re-establish internet connection to the offices at council HQ.
http://www.westerndailypress.co.uk/Gloucestershire-county-council-HQ-calls-engines/story-26268409-detail/story.html#aGQ7uobidFkIJhSq.99 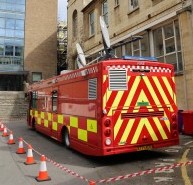