The iNetVu® Ka-1202G mobile antenna, along with its new advanced 7710 auto-acquire controller, was able to deliver in excess of 10Mbps upload and up to maximum modem capacity 59Mbps download rates using an iDirect X7 Satellite Router with 3W transceiver during the tests.

“We are pleased to see our latest 1.2m auto-deploying antenna added to Avanti’s Approved Compatibility list,” said Bilal Awada, CTO of C-COM Satellite Systems Inc. “The system was tested using 3-axis motorization allowing the user to operate within the same Ka beam or to roam to adjacent beams with auto-polarization switching function.” The iNetVu®  Ka-1202G system is C-COM’s third vehicle-mounted antenna that has been approved to operate on Avanti’s HYLAS 1 and HYLAS 2 Ka-band satellites.

A spokesperson from Avanti commented: “The C-COM iNetVu® 1.2m antenna system performed well even during a substantial hail storm where SNR marginally dropped from 17.8 dB to 14.5 dB.”

The test was performed by a leading European C-COM partner, Primetech UK. “It is exciting to be at the leading edge of new technology and the 1.2 Ka antenna from C-COM ticks all the boxes,” said Henry Walker, Managing Director of Primetech. “Our company is proud of our relationship with a world-wide supplier that has vision and provides both technically and mechanically superior products” Walker continued. 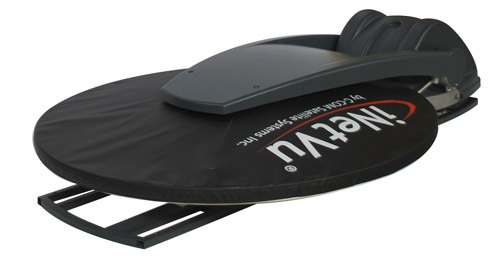 “Our resellers in Europe, Middle East and Africa now have more choices on the size of antenna and associated broadband speeds they can offer their customers” said Leslie Klein, CEO of C-COM Satellite Systems Inc.

The new Ka-1202G model is now in production and available for sale.

Avanti is a carriers’ carrier, selling wholesale data telecoms products to service providers which use them to create networks for enterprise, carrier, government and consumer users. Avanti’s network consists of: two high throughput satellites in orbit, called HYLAS 1 and HYLAS 2; a multiband satellite called Artemis plus a fourth and a fifth satellite in construction called HYLAS 3 and HYLAS 4 and an international fibre network connecting data centres in several countries. Avanti Communications has GEO satellite network spectrum filings in the ITU Master Register for Ka-band at 33.5° West and 31.0° East and for Ka, Ku, S and L-band at 21.5° East. Avanti Communications serves customers in Europe, Middle East and Africa.

C-COM Satellite Systems Inc. is a leader in the development, manufacture and deployment of commercial grade mobile satellite-based technology for the delivery of two-way high-speed Internet, VoIP and Video services into vehicles. C-COM has developed a number of proprietary Mobile auto-deploying (iNetVu®) antennas that deliver broadband over satellite into vehicles while stationary virtually anywhere where one can drive. The iNetVu® Mobile antennas have also been adapted to be airline checkable and easily transportable. More than 7000 C-COM antennas have been deployed in 103 countries around the world in vertical markets such as Oil & Gas Exploration, Military Communications, Disaster Management, SNG, Emergency Communications, Cellular Backhaul, Telemedicine, Mobile Banking, and others. The Company’s satellite-based products are known worldwide for their high quality, reliability and cost-effectiveness.